Fun and Fascinating "Pets" for the Pandemic

Animals are fascinating to watch, especially if they live underwater and swim up and down, back and forth, and every which way. We got brown Planaria, living hydra, and daphnia from an online science site called www.carolina.com. The daphnia were mostly for feeding the hydra and planarians.

Hydra viridissima are a species of cnidarian that live in freshwater. They are discernable by the squid-like appendages on top. They mostly stick to the sides or bottom of the container with their little tentacle-things waving around, but occasionally, struck by a burst of activity, they swim across the cage with an entertaining flurry of movement. To eat, they snatch food with their "tentacles".

Planaria torva are planarians of the family Planariidae. They live in freshwater, and though they do sometimes cling to the container, they are much more active than hydra and are constantly either scooting along the walls or swimming around and over each other. Planarians also eat daphnia. An interesting fact and fun experiment to try is cutting a planarian in half. When they are cut in half, each half turns into a whole new planarian. As in, each half starts moving around and eating like it never used to be part of another planarian.

Daphnia are very tiny, typically so small they're difficult to see. They can live in many environments, anywhere from acidic swamps to freshwater. They're very adaptable. Both hydra and planarians eat them. If you're lucky enough to be able to see them (Providing the ones in your batch are fairly large for daphnia; their size ranges from 0.2mm to 0.5mm!), you'll have the pleasure of watching a very active creature. The ones in my batch were constantly bouncing every which way. To be truthful, they remind me of sand fleas.

After studying the daphnia, planarians, and hydra in the name of science, all of them were deposited in our frog Squirmy's tank. Some planarians are still occasionally spotted today. No hydra are to be seen, and who knows where the daphnia went. I'll admit it: I did keep three of the planarians, one large one and two tiny. They seemed very happy in the container (Which needed refilling often). They are actually very easy to keep. All they needed was a little water and a gnat about once a week. They take well to transferring containers if you need to clean gnats from the bottom. They don't like the light too much though, so I made a paper cylinder to cover their container when I wasn't watching or feeding them.

Do you want to get planarians, daphnia, or hydra? They're amazing creatures that can live awhile with very little care, unlike a goldfish that needs feeding often.

Did you get any? Which ones? Tell me! 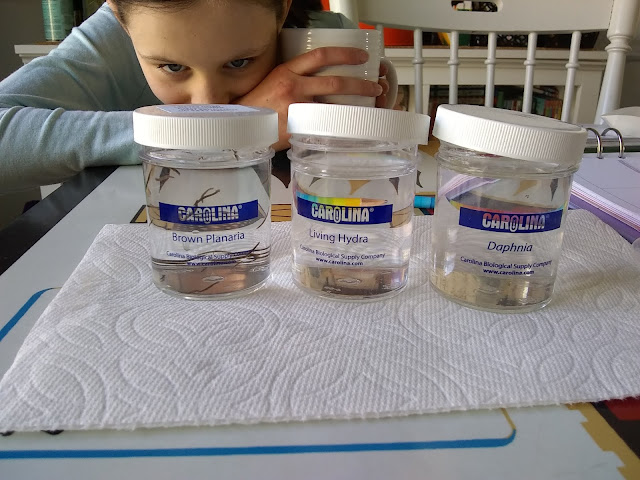