Part-Time Vegan: The Diet That Saves the Planet and Won't Drive You Crazy

Part-time vegan is a real thing. Vegan diets, if you do it right, save the planet and can give you all the vitamins and other vital things you need. However, many people want to go vegan but simply don't have the time to research and plan what foods give them important vitamins and such but are also planet-safe. Let's face it: not all vegan alternatives save the planet. Some use palm oil that is grown in chopped-down rainforest land. Some vegan foods are planet-safe and give you a balanced diet, but you have to look.

In comes the part-time vegan diet. This diet is especially helpful for people who are lactose-intolerant or something else vegetarians eat but vegans don't. By weighing out meat and other animal products, you can eat without having to worry about ruining the planet or being a full-time vegan (kudos if you are, though. That's a big responsibility!). 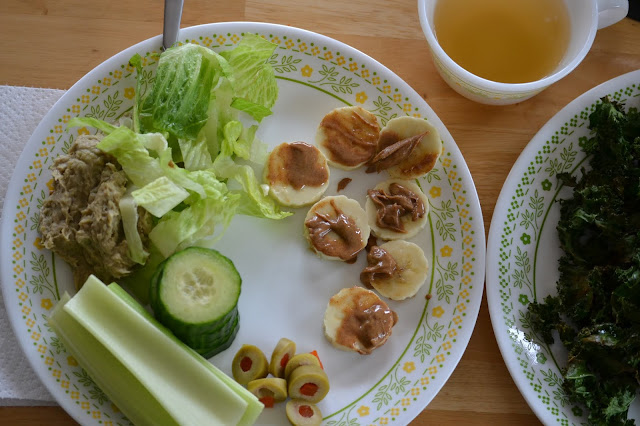 Sunday: First day of the week starts non-vegan. Dinner might include hard-boiled eggs, fish, water to drink, and a salad. Chocolate for dessert.

Monday: First vegan day of the week. Dinner might be a couscous bowl, almond milk to drink, celery for a vegetable, and vegan chocolate mousse for dessert.

Tuesday: Back to normal life (for un-vegan/vegetarians), or, possibly a vegetarian meal. Maybe bean and rice tacos with sour cream and cheese, a seltzer water to drink, plus some kale chips as the side? What about ice cream for dessert?

Wednesday: Vegan again. Try a tossed salad with kale, broccoli, carrots, lettuce, cabbage, homemade dressing, and crushed uncooked noodles. How about a glass of grape juice to drink? Vegan chocolate drops would make a good dessert. (Yes, I like chocolate!)

Thursday: Vegetarian again or normal diet. Possibly something like the picture above. A free-form salad with celery, lettuce, kale chips, olives, and cucumbers, or try some carrots or onions for variety. Maybe have a dinner roll on the side. Drink a tea with dinner. Have some Oreos or similar cookies for dessert.

So there you go. A model part-time vegan's week. Before we go, I want to give an example of an animal that eats like a vegan, because let's face it, humans are made to be omnivores. Vegan goes beyond what we're made to eat.

But did you know pandas do, too? Pandas are bears, as you probably know. But did you also know that pandas have teeth and a digestive tract suited for just and only meat, like all other bears? And what do they eat? Bamboo. Only bamboo. That's right. Pandas are meant to eat meat but their diet is primarily a singular plant. No wonder they spend so many hours a day eating and resting! They take longer to digest their meals.

Are you vegan, or were you inspired to try being a part-time vegan? Tell me!