Do you like Minecraft? In Minecraft the word mob means mobile, which refers to anything that moves. Peaceful mobs will not attack you whatsoever. (This post is in the process of being updated to catch up on the major updates that have taken place since it was written. After this post in fully updated I will move on to the others. P.S. A first days in Minecraft post is in the making. Stay tuned!) 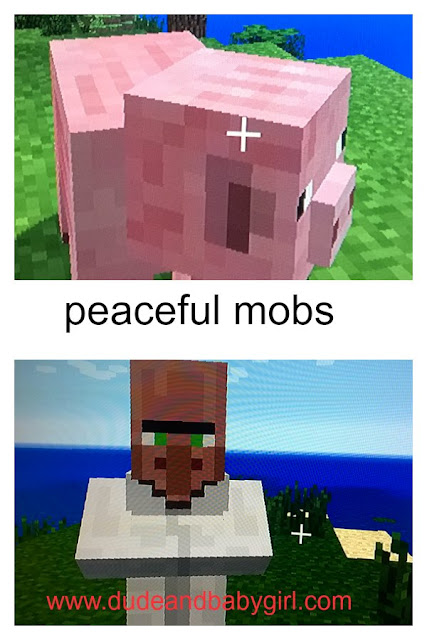 Pig
Pigs spawn in groups and then start to wander off. You can find them anywhere except the ocean and deserts. They can be bred with carrots, potatoes, or beetroot.

Useful drops: pork,cooked pork if killed with a flint and steel, and saddle if equipped. 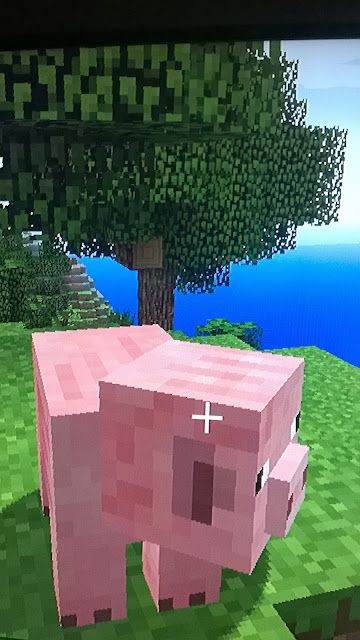 Sheep
Sheep also spawn in groups and are the prey of wolves. They also can be found anywhere but the ocean and deserts. They can be bred with wheat and are able to be sheared.

Useful drops: wool, mutton, cooked mutton if killed with a flint and steel. 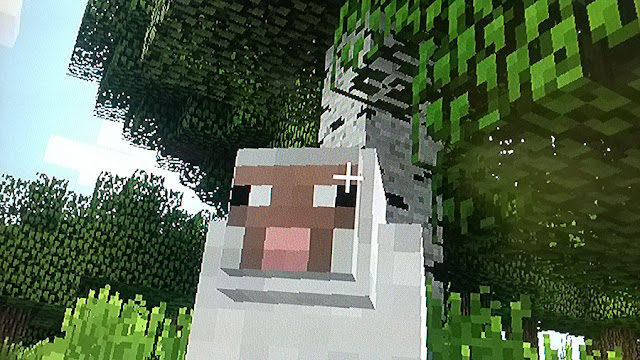 Cow
Cows are another pack wanderer and are not very smart as they will walk off cliffs. The only places they can not be found in are deserts and the ocean. They can be bred with wheat.

Useful drops: leather, beef, cooked steak if killed with a flint and steel, and milk if milked with a bucket. 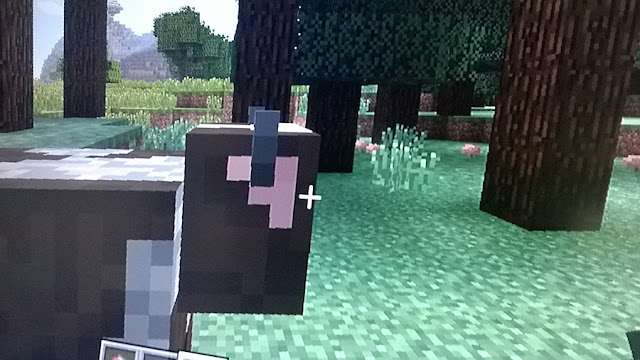 Chicken
Chickens spawn in groups of one or two chickens. They can often be found in water and almost anywhere else. They also lay eggs every ten to fifteen minutes. They can be bred with any kind of seeds. 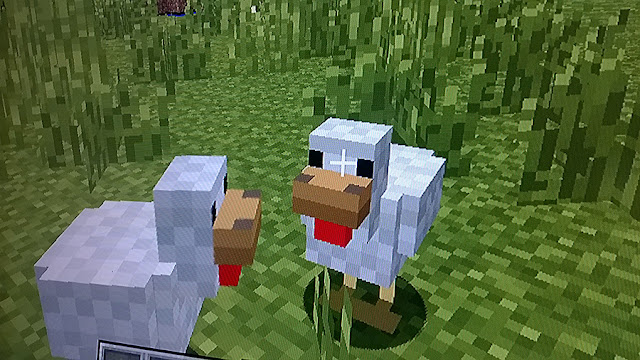 Parrot
Parrots are small birds that live in the jungle. They come in dark blue, light blue, white, red, and green. You can tame them and they will ride on your shoulder. You can find them on the forest floor or flying high in the treetops. They can be tamed with wheat seeds. 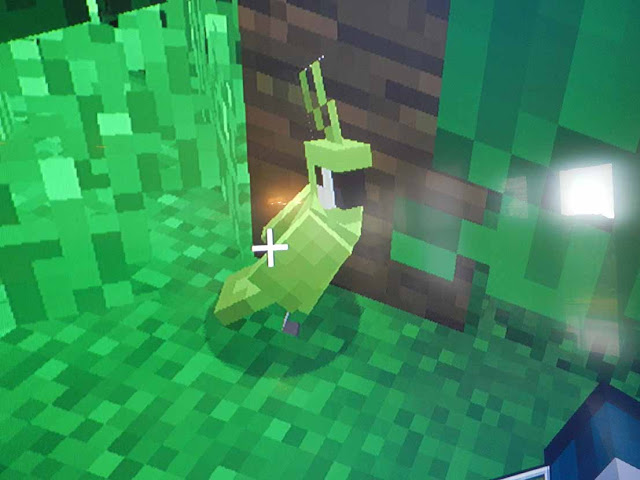 Squid
Squid spawn in groups of one or two. They can be found in oceans, lakes, streams, and rivers. 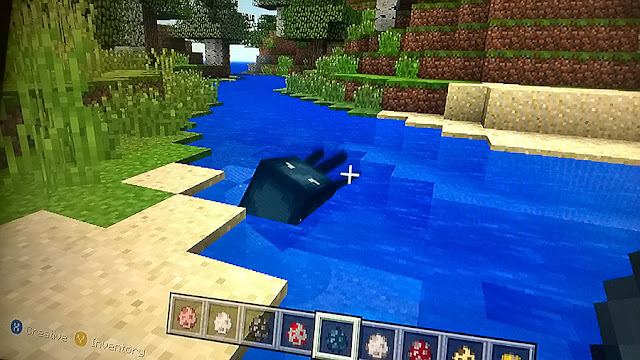 Dolphins
Dolphins are marine mods that live anywhere in the ocean. You can usually find them in pods jumping out of the water, but be sure to keep an eye on them because if they jump onto the beach they will suffocate. Dolphins seem to love boats as they will follow and jump over them as you are paddling. If they find a dropped item in the water, they will bump it around and play with it. If you feed them fish, they will lead you to the nearest shipwreck, underwater city, or buried treasure. 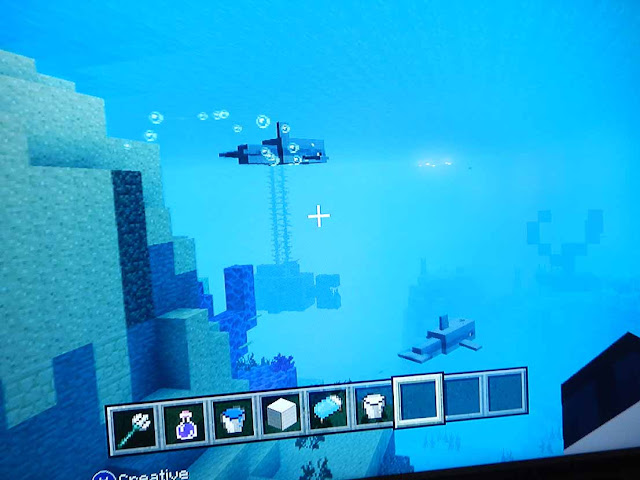 Fish
Cod, salmon, puffer fish, and over 1,500 types of tropical fish! Fish are everywhere in the water. You can find schools of cod in the deep ocean, and salmon in the oceans, rivers, and lakes. More solitary than the other types, puffer fish and and tropical fish are found in tropical rivers and shorelines. Fish are also an easy source of food. 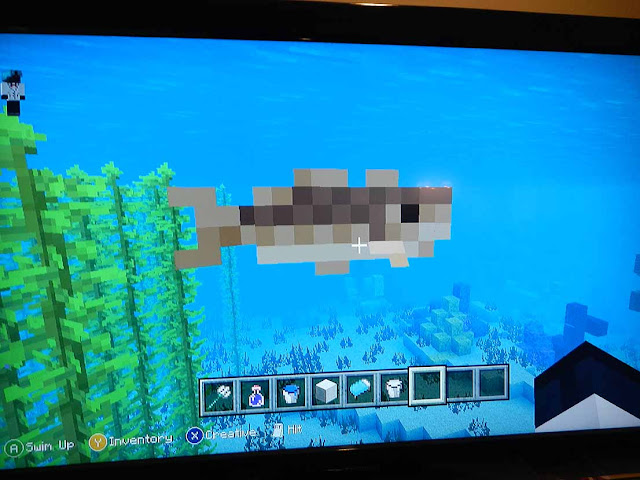 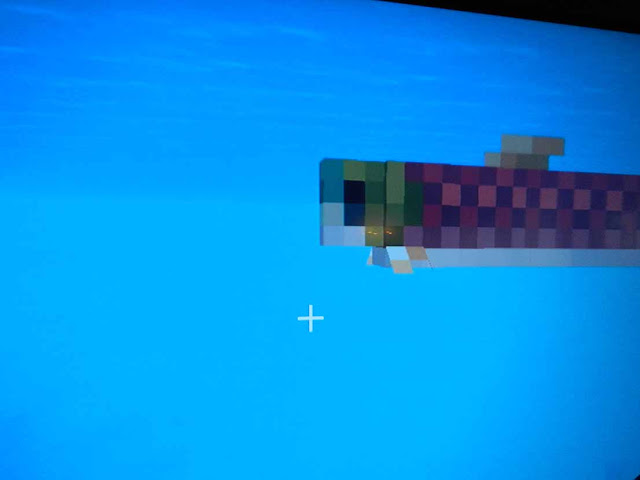 Sea Turtles
Sea turtles live in the ocean, but the large adults sometimes come to land to lay their eggs. Be sure to guard the eggs and babies, because hostile mobs will attack them. You can wear their shells as helmets. 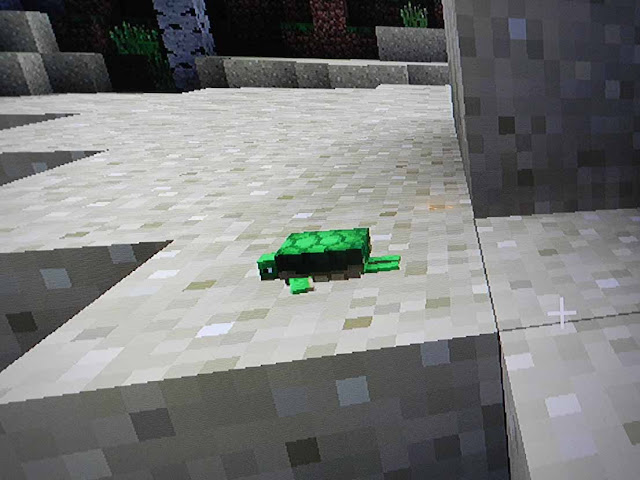 Mooshroom
Mooshrooms are a cow infested with mushrooms. They only spawn on the rare mushroom island. They will turn into cows if they are sheared. They can be bred with wheat. 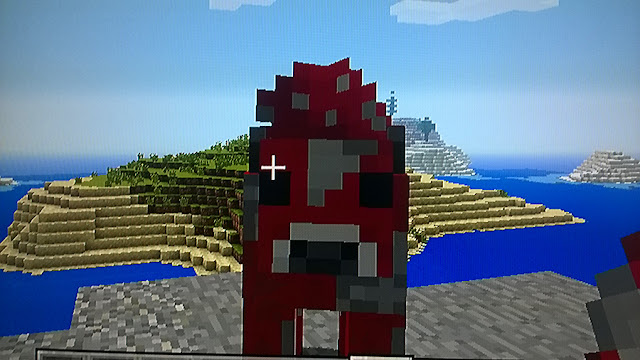 Ocelot
Ocelots spawn in groups of one. They can only be found in jungles. They will stalk and attack chickens. They can be bred with fish. 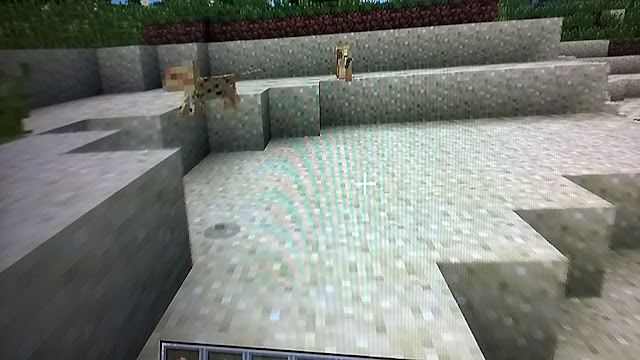 Horse
Horses spawn in small groups and you might have the luck to sometimes spot a baby. Horses only spawn in plains. They can be tamed and saddled. Horse armor and chests can be placed on a tamed horse. They can be bred with hay bales. 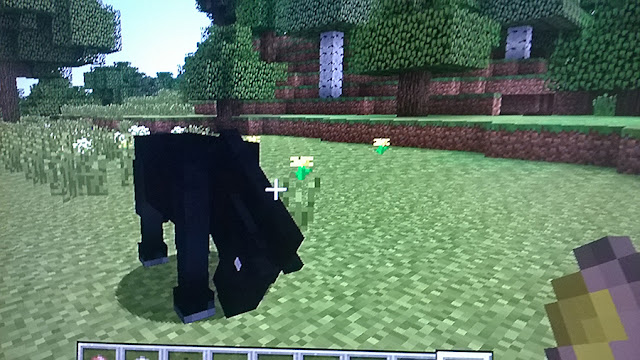 Donkey
Donkeys also spawn in plains and can be ridden and equipped with chests. They look a lot like horses but are a different color and have pointier ears.They can be bred with hay bales. 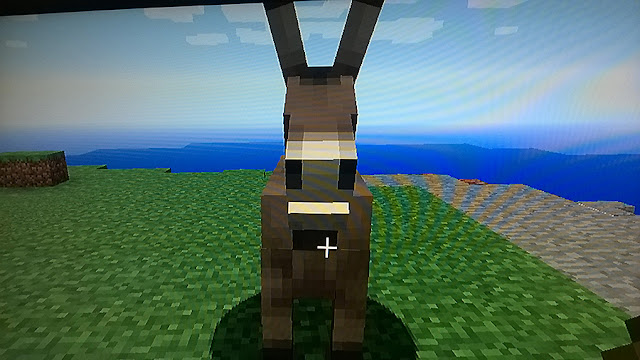 Mule
Mules also only spawn in plains, and are a cross between a horse and a donkey. They have the body of a horse but the ears of a donkey. They can be bred with hay bales. 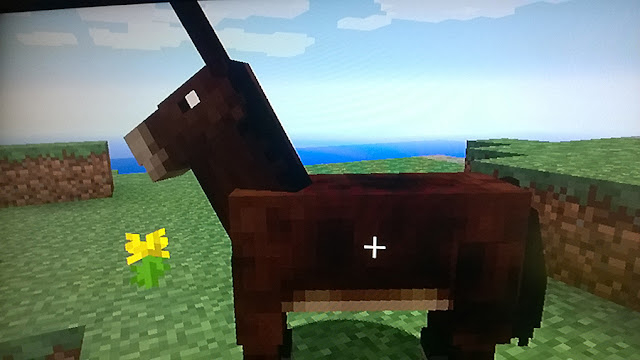 Llama
Llamas are large animals that live in extreme hills and savanna biomes. You can tame and ride them. To ride them you will need to place a carpet on them; if you ride one of them, all of the other llamas in it group will follow. They can be bred with hay bales. 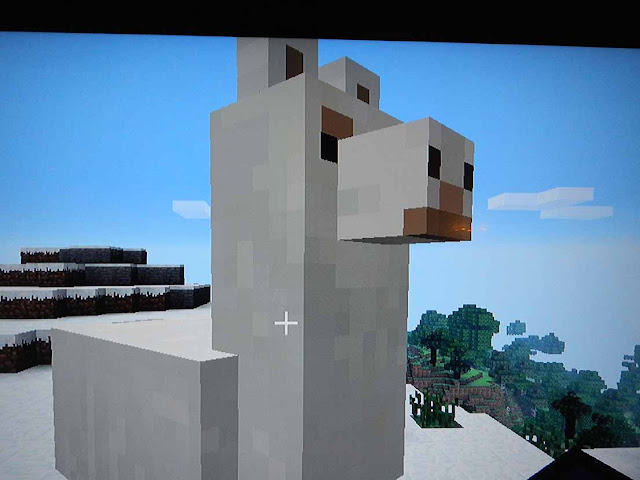 Skeleton Horse
Skeleton horses spawn if a horse is struck by lightning. Then a second strike will come, and the horse will transform into four skeleton horse men. These horses can tamed and ridden if they have no rider. 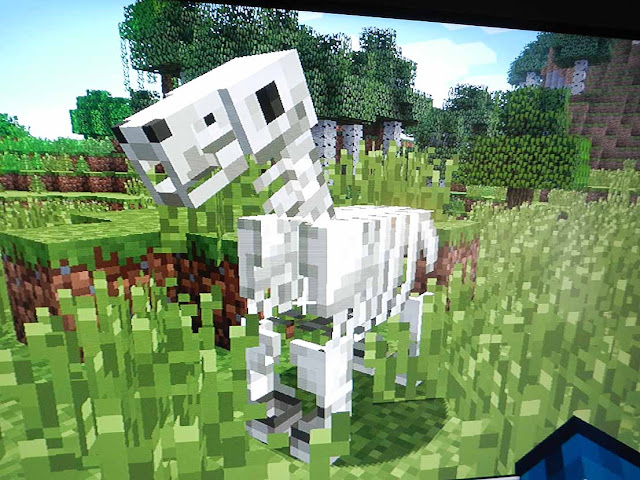 Zombie Horse
Zombie horses cannot spawn naturally. They must be spawned by a player. They cannot be ridden or tamed. 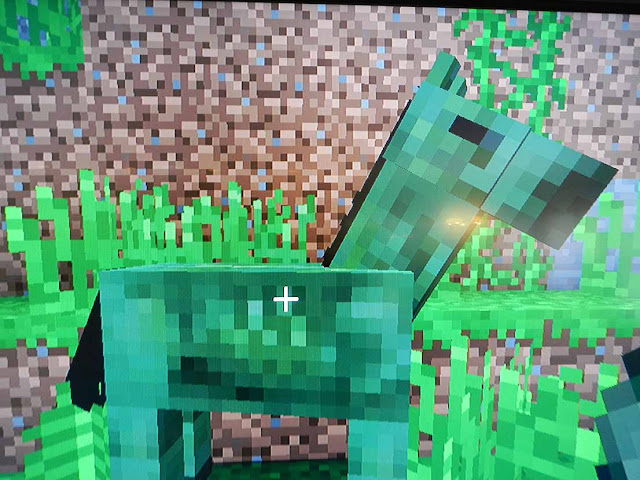 Polar Bear
Polar Bears spawn in groups of one to four and attack sheep, rabbits, and foxes. They only live in colder areas. But be aware, if there are baby bears around, the mother bear will attack you. They are also the fastest swimming mob on land, easily able to catch you. 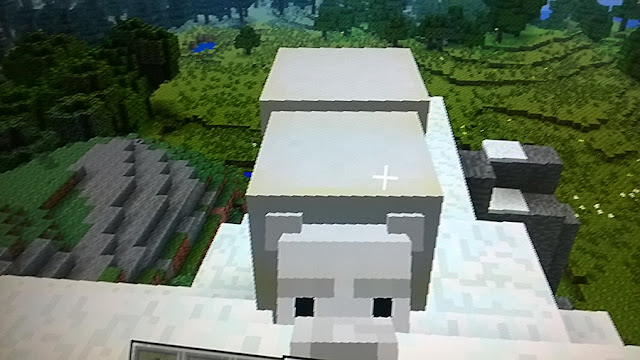 
Villagers live in, not surprisingly, villages, which can be found in deserts, plains, savannas, taigas, snowy taigas, ice plains, swamps, and jungles. Each villager has a specific job, which I will talk more about in a future post. You can also trade with villagers and the trade almost always involves emeralds. Villagers sleep at night if they can find a bed in village limits, and the amount of beds in a village corresponds to the number of villagers. If a bell is rung in the village, all the villagers will run to their homes. Baby villagers spend most of their day chasing each other around, and nitwit villagers go to bed after dark and wake up late. 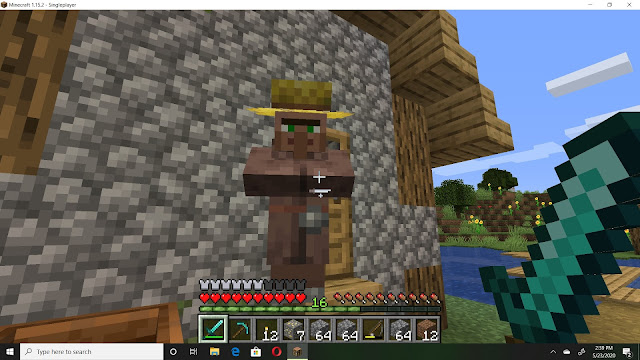 Rabbit
Rabbits spawn in groups of about one to four rabbits. They live everywhere except the ocean, underground, and jungles. They can be bred with carrots or dandelions. 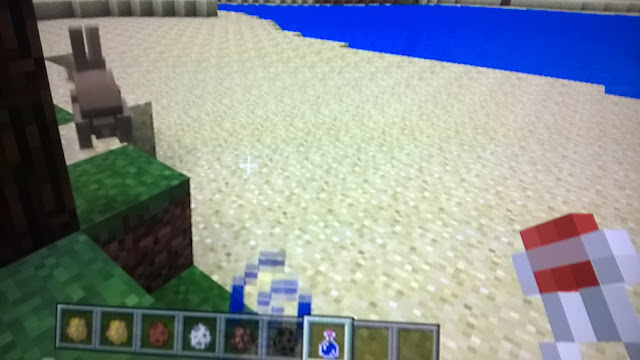 Bat
Bats are very common in caves, pits, and crevasses. They are the only peaceful mob that flies. (It is hanging upside down on the dirt in the center of the picture.) 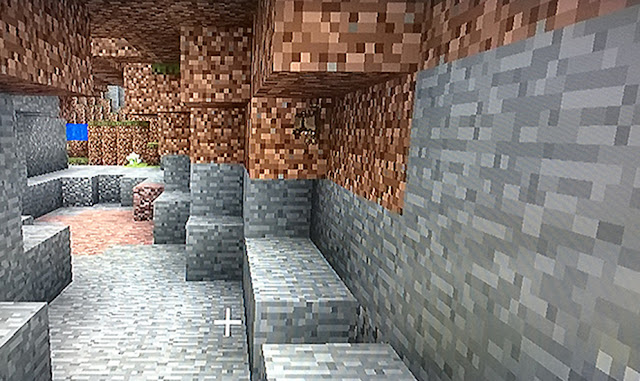 Fox
Foxes are small mobs that spawn in taiga, mega taiga, and snowy taiga biomes. Foxes in mega taiga biomes are white instead of orange. Foxes can be found with emeralds, wheat, berries, and more in their mouths. If you feed a fox a few sweet berries it will trust you. Although it's not tamed, the fox will still follow you around most of the time. If you drop an item the fox will come over and pick it up. If the fox picks up a sword enchanted with fire aspect, for example, the fox will not only attack with the sword, but set the mob it hit on fire. Foxes are most active at night, and are found curled up in small dens or under trees by day. Foxes scare easily, so to avoid scaring them should sneak.

Useful Drops: Any item in their mouth. 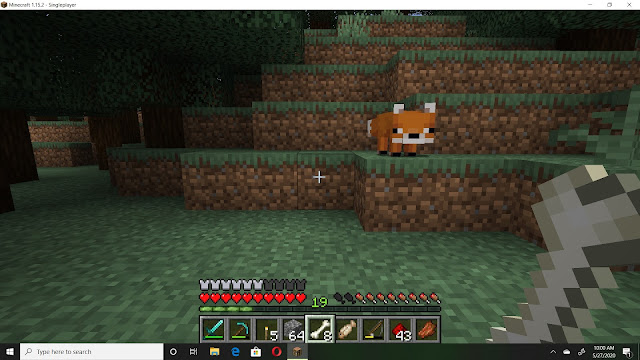 Wandering Trader and Trader Llamas
The wandering trader in a type of villager that randomly spawns near you as you go through the game. They will last about two days before they despawn. The items they offer depend on the biome they are in. But, unlike villagers, when you lock a trade the trader will never unlock it. At night the Wandering Trader will drink a potion of invisibility to avoid hostile monsters, and remove the invisibility with milk in the morning. The trader's llamas are different from regular llamas in a few ways. First, the carpet found for their saddle is impossible to craft and second, they will attack monsters or players that harmed their trader, until they die. (Regular llamas only attack once) 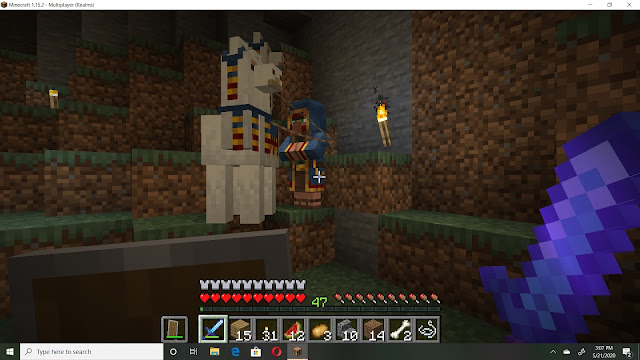 Bee
Bees are my new favorite mob in Minecraft! Pictured here is a baby bee investigating a flower. (With my dog photo-bombing) Bees spawn in semi-rare bee nests. Up to three bees can fit in a nest. About 5% of all oak trees will contain a bee nest. Bees are neutral, so if you attack them all of the bees in the area will retaliate. If you are stung by a bee, you will be poisoned for a short time and the bee will die. Bees will also grow aggressive if you take their honey or honeycomb. To prevent this hostility, place a campfire under the nest or hive before harvesting. Honey can be collected in a bottle and honeycomb is collected with shears. Bees fly around their nest looking for flowers. If they find one, they will fly next to it for a short time. Pollen will appear on the bee and it will head to its nest. When it flies into its nest the level of honey in the nest increases. When the level hits five, the nest is ready to be harvested. If a bee with pollen flies over a farm, it will have the same affect as bone meal, making crops grow faster. Bees can be bred with flowers. 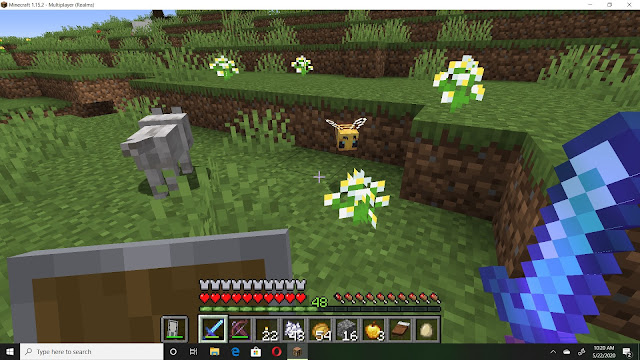 Wolf
Wolves spawn in forests and prey on sheep, rabbits, and foxes. A wolf will not pay any attention to you unless you attack it, then it and all wolves nearby will attack you back. They can be bred with raw or cooked meat. 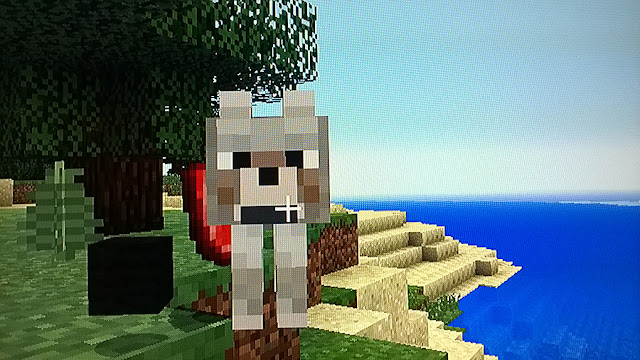 You just went through all of the peaceful mobs in Minecraft. Now you can do whatever you want with them.

What one will you go after?

Dude, pictures and by Baby girl 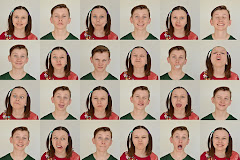 We're a brother and sister. Dude and Baby Girl are our nicknames from Grandpa. Dude is 15 years old and Baby Girl is 13 years old. We're homeschooled kids who like a variety of things. We like to have some fun! Our blog is supervised by our mom.