Foxes are my favorite animal in Minecraft and one of my favorites in the real world! This post is about Minecraft ones, if you're wondering.

Minecraft foxes have ten health points (five hearts). They are passive but will attack a few creatures (other than the player, of course) if they are wild. If they are tamed, they will attack any mob that attacks the player. You can "use" leads and sweet berries on foxes; the latter makes the foxes breed, and the baby will trust you. In the upcoming update, they will also accept glow berries.

The fox in the picture below is fishing for salmon. Foxes will attack and kill salmon, tropical fish, cod, chickens, rabbits, and beached baby turtles. 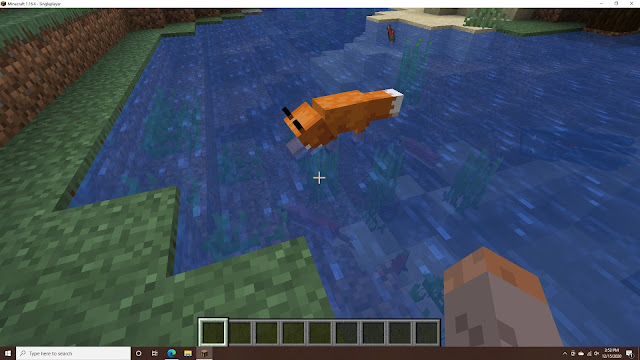 Foxes have the special and funny/annoying ability to pick up anything on the ground. They prefer food items to anything else and will eventually eat the food unless it is cake. Guess they don't like frosted, baked goods. Foxes will happily spit out non-food items for food ones, so if one picks up your sword just toss some food on the ground. The funny thing is, when foxes eat the food in their mouths, they will be affected by the effects of the food. If it eats chorus fruit, it will teleport accordingly, if it eats rotten flesh it will get sick, and, likewise, if it eats a golden apple it will get absorption. If the fox picks up a weapon, it can wield it without taking a toll on the weapon's durability. Remember that if you get a good sword and a trusting fox. Foxes with totems of undying in their mouths will use the totem and get a second chance at life much like the player would. Foxes with a fire aspect sword that hit a mob in an extinguished campfire will relight the campfire and give a critical hit to the mob.

Foxes are hunted by wolves and polar bears alike. Even baby polar bears, which are passive, will attack foxes within sixteen blocks. If in a snowy biome or forest, you'll want to keep cute little foxy close.

Foxes like to sneak into villages at night and murder the villagers' chickens, so if you have a pet fox you might want to keep an eye on it while you trade. Foxes also tend to let out screeches at night.

Foxes are very sleepy, and during the day will sleep in places with a light level of less than fourteen. If a thunderstorm is occurring, however, they will be unable to sleep. Foxes have even been known to fall asleep in the middle of a walk on their leads. Also, foxes are scared of sleeping near armor stands, so they won't sleep within twelve blocks of one. If a wild fox is sleeping, you can sneak up to it without waking it up until you stand on an adjacent block. Foxes will not wake up unless they are exposed to light levels above fifteen.

Fortunately, foxes only drop 1-3 experience points as adults, so there's no use in killing them. You can even get more experience breeding them. Baby foxes, like other baby animals, drop no experience. Foxes will always drop whatever is currently in their mouths, and, say, not in their stomachs. (So if a fox ate your enchanted golden apple, too bad!)

Lastly, the most important part, foxes spawn in taiga, giant tree taiga, and snowy taiga biomes. The snowy taiga houses snowy foxes, which are just like red foxes but are colored white and have different favorite foods.

What other mobs do you want to see specialized posts on? Tell me!